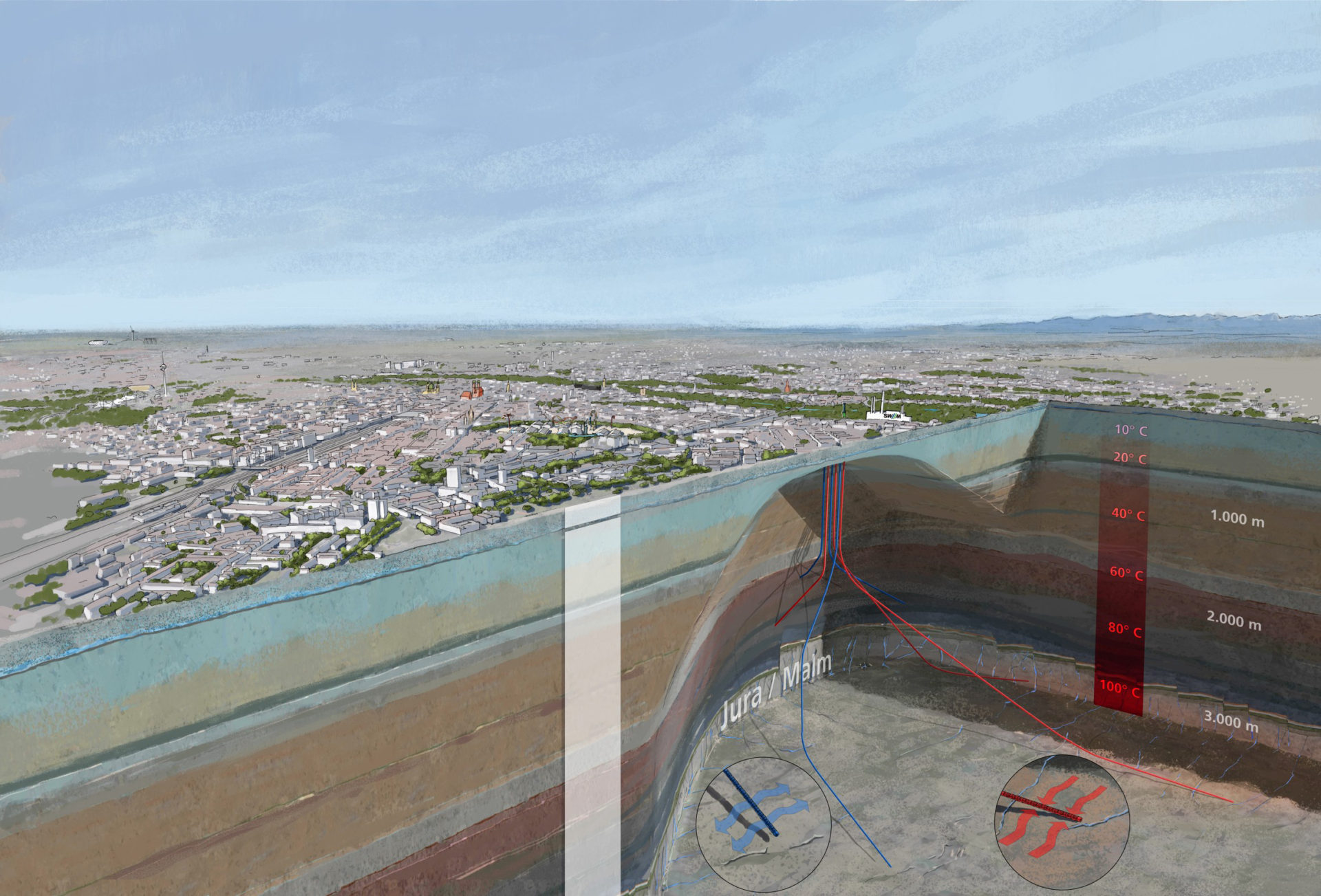 Among all of the types of energy exploration, geothermal energy has the most limited impact on the natural environment – compared to fossil fuel resources in any case. Apart from the actual construction of geothermal heating plants and district heating networks, the other potential impact of geothermal energy on our environment come in the form of microseismicity. As such, monitoring microseismicity is a central component of running sustainable geothermal operations. Beyond a very few isolated instances of slightly detectable microseismicity at geothermal plants, the majority of hydrothermal operations run largely “uneventfully” and according to proven processes.

Heat and electricity have been generated from geothermal energy in the Bavarian Molasse Basin for more than 20 years now – from around 20 plants. Bavarian geothermal companies use these for low-CO2 district heating for cities and municipalities as well as for cooling processes; at deep-water temperatures of over 100 degrees Celsius it is also used to produce electricity.

In doing so, municipalities and private sector companies have become the bearers of a promising technology while at the same time assuming responsibility for safe operational management and equally safe energy supply for citizens. In all that time there has never been any microseismicity that had damaging effects.

Perfect conditions below the surface

The geological conditions in southern Bavaria are ideal for extracting heat from deep below the earth’s surface. In the so-called Molasse Basin there is a porous, water-bearing rock layer from the Upper Jurassic period – the Malm – at a depth of about 2,000 to 4,000 meters. This contains an immense supply of hot thermal water that can be used to produce heat. Many local energy supply companies in the areas north and south of Munich already make use of this underground treasure. In order to actively support climate protection efforts, Bavarian cities and municipalities are increasingly investing in deep geothermal energy plants for CO2-neutral heat and power supplies.

This increased development has also resulted in an enormous increase in knowledge about the geological conditions in the southern Bavarian Molasse. INSIDE aims to gather further knowledge about the processes taking place underground in order to better plan, develop and operate deep geothermal energy in the Munich area.

The principle of hydrothermal geothermal heat and power generation is based on extracting hot thermal water, cooling it aboveground, and reintroducing the cooled water into the same geological layer by means of reinjection drilling. Accordingly, reinjected colder water circulates near the end point of the injection borehole until the thermal water gradually warms up again at depth. The change in temperature and natural flow direction of the thermal water can cause a change in the stressed area prevailing in the subsurface.

These stress rearrangements can potentially lead to so-called induced microseismicity and scarcely measurable ground deformation – we are talking about millimeters here. Monitoring microseismicity and ground deformation allows us to detect changes in the stress field and to thus operate geothermal plants in the safest way possible. In terms of seismicity, INSIDE is exclusively looking at the Molasse Basin. In the Bavarian Molasse, induced seismicity of a magnitude perceptible by the population – but without harmful effects – has been detected near geothermal plants in only two cases so far.

Geothermal plants, like any “mining” operation, are subject to national mining law restrictions. Geothermal operators are required to permanently monitor the seismic activities of their plants. In addition to, and independent of this, the Bavarian Seismological Service monitors seismicity and supports regulatory authorities in designating so-called impact areas. Within these areas – usually a radius of 5 km – it is up to operators to prove that they are not responsible for damages (presumptive mining damages). These are requirements imposed by governmental bodies. INSIDE is now working additionally to explore the understanding of the process in order to establish the highest possible operational safety.

In order to keep track of induced seismic events at geotechnical facilities, mining law dictates that such facilities must be seismically monitored. Also, and especially for “induced seismicity”, it is important to involve the citizens in the vicinity of geothermal projects at an early stage. This is an important prerequisite for the acceptance and implementation of geothermal projects.

Ground deformation is generally understood as either the uplifting or subsidence of areas of the earth’s surface. This is a well-known phenomenon in traditional mining areas, but it is also known that it can occur as a result of groundwater management, for example. In deep geothermal energy, there is as yet little knowledge of this phenomenon. Due to the favorable geothermal conditions in southern Germany, thermal water is usually pumped at low pressures (usually less than 10 bar) and reinjected to equalize pressure and volume ratios. Theoretical considerations suggest that borehole deformations of less than 1 millimeter may occur.

The INSIDE research project is investigating barely detectable movements in the subsurface and how they relate to the use of deep geothermal energy in the Munich area.